Forbidden Planet recently turned 30 and gave away some nice big 30% discounts, I couldn’t resist and picked up a copy of Spycraft 2.0.

This is a scary book, it has 500 pages and I can’t find any fluff in it. Most of it is rules, but there is a little bit of advice for GMs thrown in. It does cover everything, and, unlike most games, doesn’t dramatically downplay everything except combat. 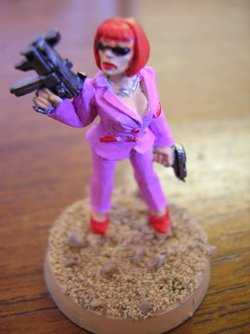 The rules for a chase sequence, for instance, involve a series of opposed rolls and an abstract distance between the participents. Each turn the two sides pick a strategy, which modifies their skill roll and provides a number of possible outcomes (such as changing the distance between the two parties, forcing the opponent to drive through dangerous terrain (or loose ground) or giving a bonus to attacks – yes, gunfire can be exchanged during a chase). The winner picks the outcome they want from the strategy they chose (and if they won by a lot, they get to pick multiple outcomes).

Complicated? It looks that way, but I like the look of it, and am looking forward to giving it a try.

As it happens, a couple of friends have moved back to the area recently (from exciting locales such as ‘the wrong side of London’ and ‘Uganda’) which gives me a suitable pool of victims to try it out on. We’ve been tossing around ideas and it looks like we’ll have:

It is early days and we just have broad strokes from a couple of emails so far, but it looks like the concept is shaping up nicely.

As a D20 based (in the loosest possible sense) game, Spycraft is almost certainly going to benefit from a battlemat so I think I’m going to have to invest in some more miniatures from the Street Violence range (I’ll take any excuse to buy them, the sets have some really nice figures in them, I just need to find time to attack the ones I have already with paint brushes).