A new block at the Tuesday Knights sees the return of Deadlands for season 2. Due to the usual variations in membership and people allocating themselves to the various games playing for the next six weeks, I was the only continuing character.

It was a short session (thanks to traffic problems and character creation) so consisted of little more than introductions and a warm up fight.

After an incident with initiative in round one and another in round two, I took advantage of the single rank of Profession (Journalist) that I picked up for background colour during character creation. 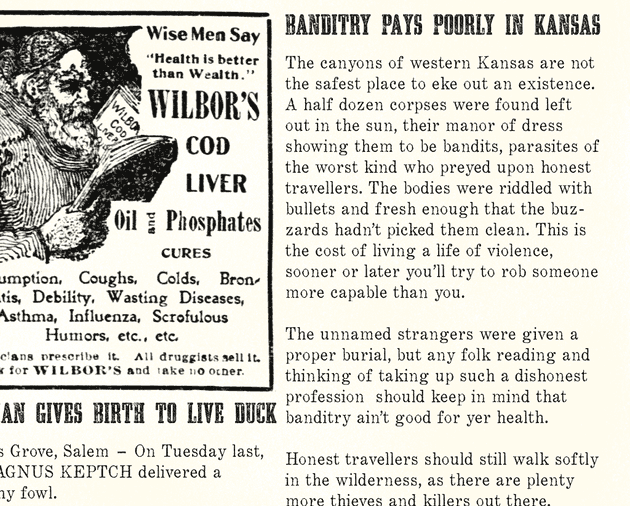 The canyons of western Kansas are not the safest place to eke out an existence. A half dozen corpses were found left out in the sun, their manor of dress showing them to be bandits, parasites of the worst kind who preyed upon honest travellers. The bodies were riddled with bullets and fresh enough that the buzzards hadn’t picked them clean. This is the cost of living a life of violence, sooner or later you’ll try to rob someone more capable than you.

The unnamed strangers were given a proper burial, but any folk reading and thinking of taking up such a dishonest profession should keep in mind that banditry ain’t good for yer health.

Honest travellers should still walk softly in the wilderness, as there are plenty more thieves and killers out there.

There was a little creative license here: The bandits were still alive and waving guns around when we first met them, but it would be unseemly to brag about one’s own exploits in print. The preachy tone is entirely deliberate.