A fun UK Games Expo this year. I’d say it was cheap since I managed to avoid spending money in the trade hall except for a set of dice (because I forgot to bring any of my own), but proximity to good, cheap food or accommodation were not among the many benefits of the new venue.

So what did I do… Mostly, I skipped the boardgames tournaments that I usually enter and opted for lots of RPGs instead.

The Mattock of Mandabor (DnD) was a decent 4e game. It didn’t have quite as much combat as I would have expected from 4e, and it lacked the grid that is usual for the system. This was a shame as I signed up for it expecting an easy afternoon of pushing miniatures around a battlemat to ease me into the weekend. It would be unfair to criticise it for not being what I was expecting though.

Daring Tales of Adventure: The Jewel of Zinj (Savage Worlds) was a good, rollicking Pulp adventure. Dutchess had to face the terrible dilemma of criticising Brent for murdering a magnificent beast or giving in an asking him to skin the animal so she could have a new fur. The twist at the end was interesting, but one that depends on the player to receive it to be receptive to the idea (unfortunately, in this case, he wasn’t).

Captain Scarlet: Live & Let Retrometabolise (Savage Worlds) was excellent. An assortment of Bond villains made guest appearances and were dealt with. Captain Blue turned out to be something of a psychopath (what else was I going to do with a character whose only social skill was Intimidation d10?). I especially enjoyed calling a Joker at just the right moment to go before Captain Black so as to be able to squash him between my SPV and a large HGV before he could climb on board.

Escape from Mos Shuuta was a useful introduction to the new Star Wars RPG. I’m increasingly not a fan of it (or WFRP 3e) as the dice take too long to resolve (since you have to do symbol adding/subtracting on, what are effectively, two and a half sets of symbols, and then resolve the effects of each of those sets … for every action). The system has some very good ideas, but I think reducing the level of crunch and using Fate to handle the narrative effects makes for a better game, at least for the Edge of Empire level. The system might turn out to be good for handling a Jedi game, but it will be a while before we can see how that works out.

Scooby Doo F’Taghn! (Savage Worlds) was the highlight. Two foolish players failed to turn up, so two of us ended up pulling double duty on characters. I ended up with Daphne Blake and Frederick “Fred” Jones. 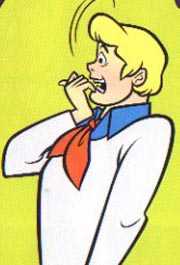 Daphne had Fighting d4 so was clearly not the movie version of the character. The dice disagreed and kept exploding, which led to the infamous 22 point zombie-slaying saucepan attack in the kitchen.

Fred then made his infamous terrible mistake (since he refused to believe in the supernatural) and removed the zombie’s mask. This took a surprising amount of effort.

There were lots of other great moments and it was an excellent game.

While I had fun at all of the RPGs I played in, the Savage Worlds ones were the best and I’m now sold on the system. I think I shall be running some in the not too distant future.

I managed to get in a demo game of Quarriors! and decided that it seemed fun so I might pick up a copy at some point. I also tried out Forbidden Desert (since Jess bought a copy), which I think is more fun than Forbidden Island (and will probably play some more of when I see Jess again next month).

For the first time, I actually attended one of the seminars … which was a Star Wars Vs Doctor Who panel game with all the organisation (not a lot) and fun (a great deal) that you would expect from something we imagine was dreamed up in the hotel bar the night before.

This didn’t leave a great deal of time for sleep so I’ve been glad to have a bank holiday Monday to recover in!