Wargames conventions are dangerous places, and my bank balance took some hits when I went to Salute this year.

One of my acquisitions was a copy of Dwarf King’s Hold. This is a fun little game with fairly simple mechanics, but a fair amount of tactics. I’ve played through the first scenario twice now, once as each side. The undead won both times, but it was a close thing on the second game. I’m looking forward to giving scenario 2 a shot.

The figures are great, but suffer from Mantic’s usual problem of not having enough bases (none in this box). The box set comes with a £5 gift token which I’m going to splurge on getting some more (since I have various Mantic freebies that came without bases).

The other worry I have about the figures is that you really need to glue them, which might limit the set as a mainstream board game (which is a pity, because I think it would suit a certain segment of that market). 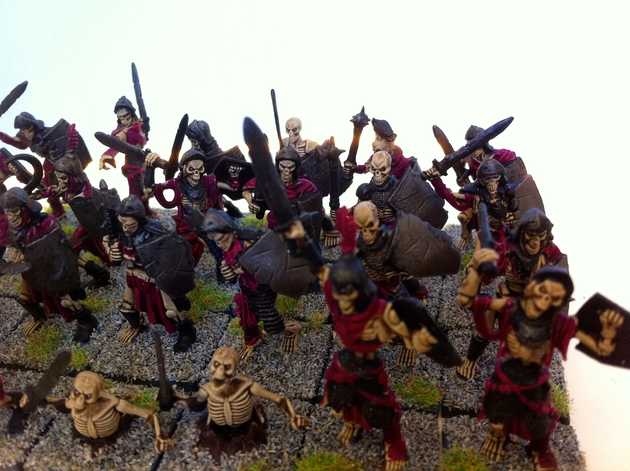 I’ve painted up the skeletons by applying some Army Painter Skeleton Bone primer, slapping on some Warlock Purple for the cloth, painting a few bits in black and then dry-brushing a dark metallic paint on the weapons and shields. Then it is off to Strong Tone Quickshade before painting the bases dark grey with a coating of Ash Grey flock then adding a little static grass before applying a matt varnish.

I’m quite happy with the way they have come out, and it has encouraged me to dig out the box of undead that I still need to paint from last year. Hopefully I’ll be able to find a few more days to work on them before the end of Easter.