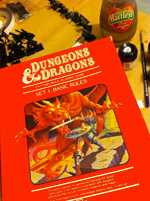 D&D Essentials might not be due out for a little while, and I might live far away across the ocean from WotC HQ, but I’ve managed to get my hands on a copy of the glorious starter pack for D&D in its nice little red box.

It is a shame that the dice are missing though; I lost them years ago (they were really rather rubbish polyhedrals though). For that matter, I think there was a crayon that came with them so you could colour in the numbers…

Being more serious for a moment, if I were to buy the D&D Essentials box, how often would I grab the wrong box from my shelves by accident?

(I didn’t say how much more serious I was going to be, but perhaps there is such as a thing as too much nostalgia.)

Having posted this, I now notice that the new edition uses the original logo instead of the 4e version. I now regret cutting the TSR logo off when I framed the photo. Whoops!