As I mentioned a few weeks ago, SotC is getting another outing at my regular group. I’ve even managed to write up the story so far. 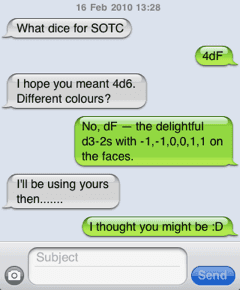 It has been a very long time since I’ve been able to run it (so long that one of my players has forgotten about the interesting dice in the game), and I’m really looking forward to getting my GMs hat on tonight.

I’ve been lifting large chunks from a prewritten adventure, but the third act never really sat well with me. So I decided to rewrite it, less than 24 hours before I ran it. Aren’t I clever? Still, I think my efforts last night were worth it, I got rid of annoying sequence of repeated “Look here, fooled you! Look here instead!” scenes, and added an Indy reference (along with a few things that I’d better not talk about before they come out in play).