I have to confess that I’m not a great fan of collaborative board games, which is odd considering that I do enjoy RPGs – which are extremely collaborative (at least for the most part, from time to time a game comes up where backstabbing, lying, cheating and general conniving is expected to take place between players, but that is the exception). 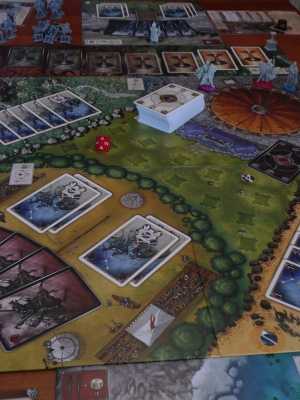 So when people suggest a game of Arkham Horror, Order of the Stick or Shadows over Camelot, I’m last to say “yes”, and in the case of SoC I’m usually crying “Oh no, please not Shadows over Camelot”. This weekend, however, I bowed to the will of the group and gave it another try.

It turns out that this game is much better when you aren’t playing as the traitor (the possible random player who works against the group while trying not to look like they are an enemy) during your first go at the game when you are still learning how to play.

It also turns out that if you play after you’ve had a few drinks it rapidly descents into an exchange of pseudo-Arthurian speeches designed to identify which cards have been drawn by the other players.

It would be simple to say “I drew a grail card” or “I’m putting a one point card on the Black Knight attack spaces”, but that is against the rules. Instead we get “Verily, My Lord, I hath news of the Grail!” and “My Leige! The Black Knight hath caught his foot in his stirrup.” Bewards to imbibing too greatly though, else phrases such as “My-th Leige! Thine Blacketh Knight hath caughteth his foot inth hith stirrupth” might start arriving at the table. (Maybe we shouldn’t go to Camelot – it is a very silly place.)

Anyway, we roundly defeated the forces of evil that surrounded Camelot and I was left with a much better opinion of the game.

I’m still not fond of collaborative board games in general, but this is better than most – just so long as you aren’t struck trying to learn it without helping the other players win, as the traitor must.